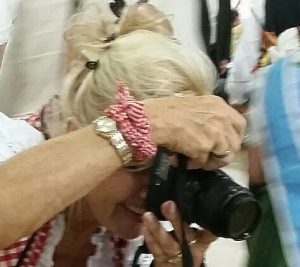 Pause a moment! Can you guess who is hiding behind the camera, the photographer present at functions of the Sportclub and the Oktoberfest for over 11 years?  Of course you do, It’s Helga Pearson. She not only diligently takes picture but after the event selects the best ones, crops and resizes, sorts and uploads pictures to the websites for you to enjoy. Helga, thank you for your  enthusiasm and all your hard work.

To view please click on a TAB. Under each Tab you will find a brief description of the type of event. Albums are sorted by year. Click on an album. Click on a picture. You now can view the pictures in a slideshow.

In August we have our Traditional Summer Night Party at the grounds of Sonny Bourne, a beautiful Indoor/outdoor facility. This party is a combined event of the DSC and the Gesangverein Virginia. Everyone can enjoy good entertainment, our famous pork roast, German beer, wine and soft drinks.